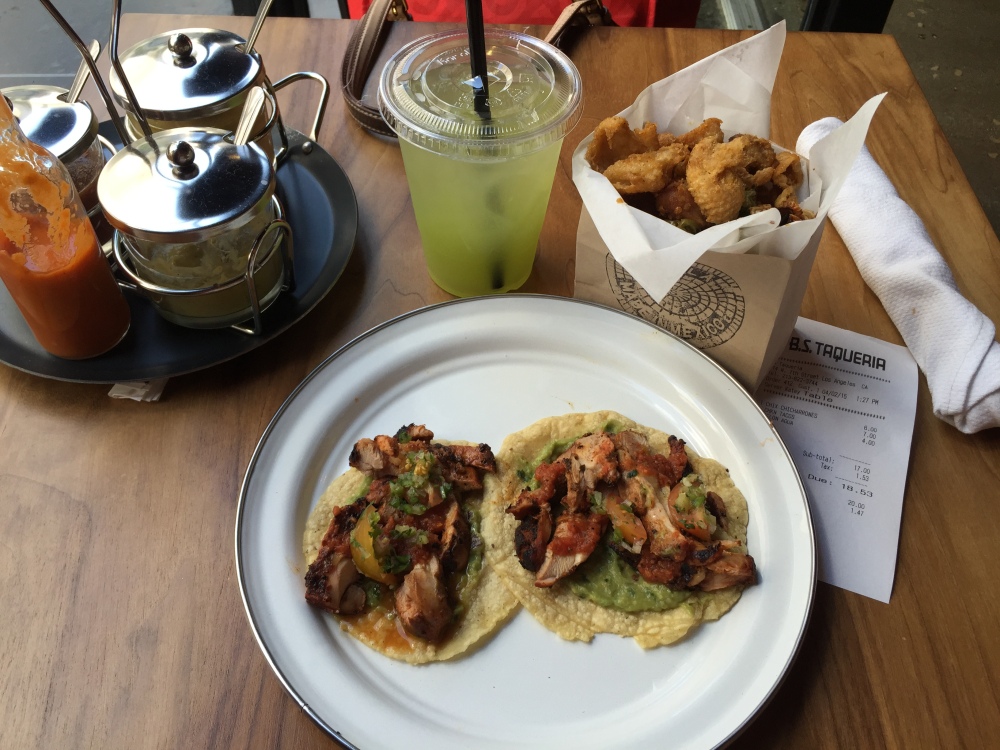 Last week, I traveled to Los Angeles to meet my new nephew (he is adorable by the way)! 🙂 I went during my school’s spring break, so I had several days to bask in the LA sun. However, in a brief moment of boredom, I began scrolling through my MANY emails; I found a gem amongst the junk. It was an email from Eater LA, and the headline read, “Inside B.S. Taqueria, Ray Garcia’s Triumphant Taco Spot Opening Tomorrow in Downtown.” Tacos? Tomorrow? In Downtown LA? Oh, I knew I had to be there! I immediately, went to the maps app on my phone and figured out how to get to B.S. Taqueria on public transportation. That next early afternoon (don’t judge me) I woke up, got dressed, and set out on my foodie venture. I rode through the city, taking in all the sights (not that I have never seen them, but because I used to live there, and the sight are nostalgic), and before I knew it, I had arrived at my stop.

I hopped off the bus and smiled as the sun beamed down on me. My smile brightened as I walked up to the restaurant and was greeting by a man, whom I assumed was a manager, outside. He kindly guided me inside where I met the sweetest, most friendly young lady, Vail.

She was so sweet, giving me her food suggestions (and kind-hearted compliments :-)) before she took my order. It was self-seating, so I took a seat with my order number and Melon Thyme Agua Fresca; I sipped this deliciously refreshing drink as I scoped out the restaurant, taking in the vibrancy of the décor and ambiance. B.S. Taqueria’s bright colors and intimate setting will make you feel like you are in someone’s home kitchen instead of a restaurant in the heart of Downtown LA. 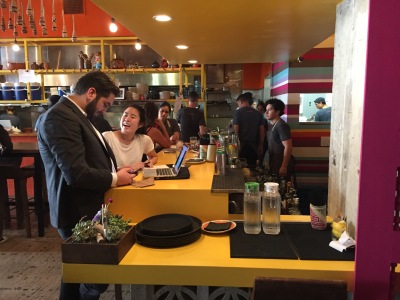 The open kitchen allowed me to see Chef Ray Garcia and his amazing team in their element as they crafted mini masterpieces; my works of art came in the form of two Chicken Tacos and a bag of Lemon-Pepper Chicken Chicharrones. I LOVE chicharrones, or as I grew up calling them, (pork) skins; since I have given up red meat, I unfortunately can no longer eat them. I was most appreciative that B.S. took a classic, like skins, and put a their spin on them by using chicken; they were actually better that any pork skins I have ever had. 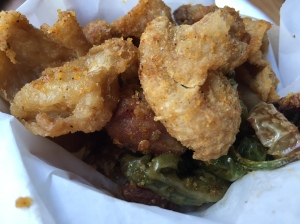 All I can say is: soooooooooooo good! The combination of the tangy, yet sweet lemon flavor with the spicy pepper flavor of the chicken skins made my heart sing. Then the tacos! Oh my goodness! They were excellent: the homemade tortillas, perfectly seasoned and tender chicken, guacamole and tomatoes made the most perfect tacos. I nearly cried when my tacos and skins 😉 were gone. 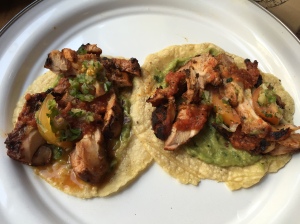 During my meal, an energetic and friendly waiter, Zach was very attentive; he checked on me often. After I finished my meal I asked him about the indoor “patio” I had read about, and he took me back to see it; it is absolutely magnificent, from the artistic details in the mural that adorns the walls to the fern like tree that covers the space.

My entire experience at B.S. Taqueria was stellar. If you are ever in Los Angeles, you must make it over to 7th Street to try for yourself. As my bag of Lemon-Pepper Chicken Chicharrones said, it is the “City of LA, Made in Mexico.” This place embodies the vibrant and hip vibes of the City of LA while the tastes and flavors are mirror those Made in Mexico.

Wishing this gem, B.S. Taqueria, all the best and much success!

Adventures in food from BirmingHAM's 'hood to the hills and every delicious bite in between...and beyond

ADVENTURES IN FOOD, TRAVELS, AND CRAFTINESS.

this is... The Neighborhood

the Story within the Story

This WordPress.com site is the cat’s pajamas